Guardiola looking forward to taking on Xavi in charity clash 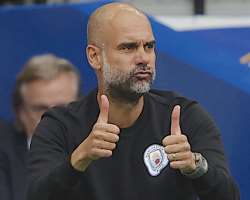 After spending time as teammates and coach to player the friends will turn foes as they face each other in a charity clash in august as coaches of their team respectfully. There’s something special about watching a world-class midfielder and legendary manager link up to create something special, and that’s just what the two of them did at Barca back in the day.

That duo will be back on the same pitch for a charity match in August later this year. The match benefits the fight against ALS and will see City come to the Camp Nou on August 24th.

Pep spoke about facing off against his former pupil at a press conference to promote the match.

“Xavi and I have known each other a long time,” he said.

“He’s been a team-mate and later I coached him. I will always be grateful for how he helped me on the pitch. His career speaks for itself. The club can get back to where it was. I am delighted we will meet again.”

It’s gonna be a treat, now let’s not get plowed 5-0 please