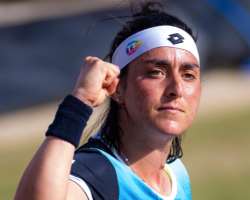 Bencic suffered an ankle injury in the final game of the opening set, and though the Swiss player continued for three more games, she stopped the match while trailing 6-3, 2-1.

Although the circumstances were unfortunate, Tunisia's Jabeur now becomes the only player other than World No.1 Iga Swiatek and this week's Birmingham champion Beatriz Haddad Maia to claim multiple titles this season. Jabeur won the WTA 1000 title in Madrid on clay last month.

Jabeur and Bencic had played three times before, all on clay, with Bencic leading the head-to-head 2-1 coming into Sunday.

The pair had already met twice this year: Bencic defeated Jabeur in the Charleston final, and Jabeur exacted revenge en route to her Madrid title.

Jabeur now has two grass-court titles to her credit: she became the first Arab woman to claim a singles title when she prevailed on the lawns of Birmingham last season. Jabeur has been even more prolific this year, as she has reached finals in four of her last six events.

Jabeur, currently ranked at a career-best World No.4, is now projected to rise to a new career-high ranking of World No.3 on Monday.

Match moments: Behind fierce forehands, Jabeur raced to an initial 3-0 lead in the match, but Bencic got back on serve to pull to 4-3. Jabeur, though, played a stunning game to break again, firing deft lobs and consistently grazing the sideline to lead 5-3.

Bencic had four break points to get back on serve in the next game, but Jabeur fended each of them off. On the fourth deuce of that game, Bencic went over on her ankle while returning serve, and took an immediate medical time-out.

After Jabeur served out the first set, Bencic contested the first three games of the second set, but after being broken for 2-1, last year's Olympic gold medalist had to stop play.