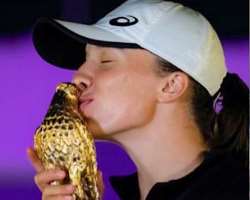 Tennis world just took another twist. After the bitter unexpected withdrawal of the Australian Ashleigh Barty, Iga Swiatek literally took the whole scene within the WTA Tour, collecting wins after victories and making sure 6 consecutive titles, becoming the ruler of the women's tennis.

An impressive moments regarding her career, already at high levels; the leap in quality that is expected from all of them has arrived and she is making all the difference against her rivals. The gap between her and the rest of the players is still too wide and at the moment it seems really difficult to think of interrupting her domination on the tour.

The result of the last period was incredible: three Masters 1000 and now also a Grand Slam to mortgage that she is the athlete to beat on every occasion. The girl, at the age of 21 year-old, was able to triumph in Qatar, in Indian Wells, Miami, Stuttgart, at the Foro Italico in Rome and in Paris.

A string of victories, never questioned, without anyone having interrupted her journey. The last success on the central court Philippe Chatrier in France, regulating all the seven opponents who appeared on her way, without even granting a set, and being able to once again raise the trophy to the sky.

She beat the American Coco Gauff in the final, she surrendered with a clear score of 6-1 6-3.

Only the best players in history have managed to realize this streak of positive results and Swiatek can truly enter history in a solitary way.

In fact, counting the second Grand Slam of the season, the Pole has reached 35 consecutive successes. A statistic that brings her to first place in the special ranking, together with Venus Williams. US champion Serena Williams was also surpassed (behind her with 34 statements).

For Iga, therefore, it will be enough to win the first round of the next official competitive race on the Tour to isolate herself at the top of the ranking, obviously writing a page in the history of women's tennis. The feeling is that this level of number one is unbeatable for anyone