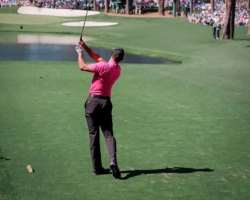 In response to the anticipation of golf fans all over the world, Tiger Woods returns in style. Woods made an inspiring start in his return to competition at the Masters on Thursday as he reached the turn three shots behind early leader Joaquin Niemann in front of a throng of patrons thrilled to see the five-time champion back.

In his first competitive round of golf in 508 days after suffering a career threatening car accident, Woods went on to impress fans, he was even par through nine holes after mixing one birdie with a bogey at Augusta National playing alongside Niemann who, bolstered by an eagle at the ninth, held a one-shot lead.

He was greeted by spectators who arrived in the early hours to get a front-row seat.

After five consecutive pars, Woods nearly had a hole-in-one on the par-three sixth hole. His tee shot stopped two feet from the cup to set up a tap-in birdie.

Woods made his first costly error at the par-five eighth where he was left staring at the ground after his third shot came up short of the green. He chipped to nine feet from where he needed two putts for bogey.

At the ninth, Woods sent his tee shot left into the trees and looked headed for another bogey when his approach caught the false front of the green but he managed to get up and down from 17 yards.

Defending champion Hideki Matsuyama, who last year became the first Japanese man to win a major, was playing one group behind Woods and was even par through eight holes. More updates will be highlighted