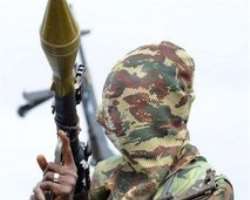 
SOME multitude of unrepentant insurgents who insist that they are ''freedom fighters'' in the Niger Delta, Nigeria's main oil and gas region, claimed on Thursday that they are getting worried with an alleged under current moves by President Goodluck Jonathan to contest in the coming 2011 presidential elections.

One of the major insurgent platforms in the oil region that is galvanising the insurgents, Joint Revolutionary Council (JRC) says the heated debate on Jonathan's ambition is causing great harm and neglect in the Niger Delta.

The JRC spoke just as Mr. Nengi James, an activist in Bayelsa State told our correspondent on telephone on Thursday that the political crisis in the state over thedeputy governor position was stalling development efforts in the state.

According to him, ''the people of Bayelsa as i speak to you, do not know who their deputy governor is. This is causing serious concern in the state as the situation is capable of degerating to something else. The people of Bayelsa are demanding that a certified true copy of the Appeal Court ruling on the matter be advertised for public knowledge''.

In the mean time, Spokesperson for the insurgent group, Cynthia Whyte, in an on-line statement to our correspondent the same day also said, ''it is not every Niger Deltan that wants Jonathan to run for Presidency. Most Niger Deltans want him to just conduct credible elections and then leave the same way he came''.

According to the insurgent group, ''there are many who believe in pedigree. The forces that manipulated former President Olusegun Obasanjo into considering a Third Term may be at work on President Goodluck Ebele Azikiwe Jonathan right now. These forces have been diversionary, divisive and very distracting''.

Continuing, they added, ''too much energy is being channeled to the Jonathan Must Run project that same way energies were chammeled into Youths Earnestly Asked for Abacha and the OBJ Third term drama. It is a pity that the Nigerian state is in such sorry state.

''Months after he assumed position as Acting President and then President of the Nigerian state, Jonathan is yet to make any bold move towards development in the Niger Delta.

''Petroleum Technology Development Fund (PTDF) continues to shortchange the people of the Niger Delta in the award of oversea scholarships for graduates and post graduates''.

''The quality of political leadership in the Niger Delta'', they went on, ''is still very poor. So tell me, what value has a Jonathan presidency brought to the people of the Niger Delta.

''With the coming of Jonathan, there was hope in certain quotas that the Niger Delta may get a far better deal. It is beginning to dawn on these people of that it would certainly not be so. Apart from a deeply flawed amnesty programme that focuses on the rehabilitation of so-called ex-combatants and bandit elements from the creeks, nothing else is being done''.

The rest of their statement went thus: ''There is belief in certain quotas that Yar'Adua was far more concerned in the development of the Niger Delta than Goodluck Jonathan. Spent forces who still seek relevance are bent to ruining Jonathan.

''Rather than correctly advise, guide and counsel Jonathan on how he can strengthen the course of development in the Niger Delta, these people have channeled all their energies into making noise and joining issues on whether Jonathan should run or whether zoning in PDP is real or not. The current trend amongst Southern politicians at the moment is to sing the“Jonathan Must Run” swan song.

''During his first official visit to the USA, he told an audience that the Rivers State Government was building a World Class Mega Hospital in Port Harcourt. Clearly he had been misinformed as Clinotech (the developers of the hospital) and its Canadian based Rivers born owner Dr Harrison Ofiyai is currently being questioned by the anti-crime agency ICPC for financial embezzlement of state funds. The Governor of Rivers State Amaechi himself has tagged the Harrison Ofiyai man as a dishonest person.

''Yet the President of the Nigerian State was way up in the USA bragging about a Mega Hospital in Rivers State.

''The peoples of the Niger Delta are a deeply challenged people at the moment. While they know that their son is President, they are also agonized that their son cannot do anything for them because he is scared of making a wrong political move that could jeopardize his future political ambitions''.

They, however, added, ''President Goodluck Ebele Jonathan is beginning to push his luck''.