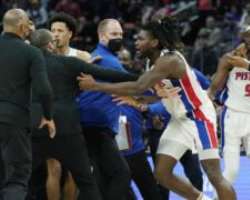 James will miss Tuesday’s nationally televised game against the New York Knicks. It’s the first suspension in his 19-year career.

Stewart will miss Tuesday’s home game against the Miami Heat and Wednesday’s game at the Milwaukee Bucks.

The Lakers and Pistons will meet Sunday at Staples Center.

Stewart was suspended for what the NBA deemed was “escalating an on-court altercation by repeatedly and aggressively pursuing” James “in an unsportsmanlike manner.” James was suspended “for recklessly hitting Stewart in the face and initiating an on-court altercation.” Los Angeles Lakers star LeBron James is ejected during the third quarter against the Detroit Pistons on Nov. 21, 2021 at Little Caesars Arena in Detroit. (Nic Antaya/Getty Images) LeBron James, Isaiah Stewart ejected after bloody fracas

James was ejected after his elbow and what appeared to be his fist connected with Stewart, beginning an altercation where Stewart repeatedly charged James.

The two got tangled up on a free throw in the third quarter of Sunday’s 121-116 Lakers win before James made contact with Stewart's face, drawing blood. Stewart, a second-year center, got in James' face in the aftermath before players on both sides had to be separated.

Stewart charged at James again, shedding teammates and team security but the two never engaged after. Whether James meant to connect with Stewart was immaterial to the center, who clearly didn't appreciate the contact and his bloody face was evidence enough.

LeBron and Isaiah Stewart got into it

LeBron has been ejected.
(via @NBA_ClipIt ) pic.twitter.com/qLjQeOecUH
— Yahoo Sports (@YahooSports) November 22, 2021
James was ejected following the officials' review, deeming his actions a flagrant 2 foul. It was James' second career ejection. Stewart also was ejected after two technical fouls. He also needed five stitches, according to the team.