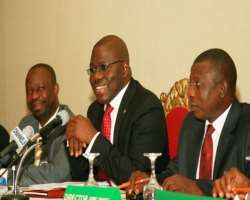 
ABUJA, July 13, (THEWILL) - Minister of State for Finance, Mr. Remi Babalola, today canvassed the adoption of fiscal prudence at all tiers of governance in line with the provisions of the Fiscal Responsibility Act (FRA) 2007.

He disclosed that fiscal prudence would assist in maintaining macroeconomic stability and also position the economy on a sustainable growth trajectory.

Babalola made this known in Abuja while presiding over the monthly Federation Account Allocation Committee (FAAC) meeting, which was attended by Accountant General of the Federation, Alhaji Ibrahim Dankwambo; Director of Home Finance in the Federal Ministry of Finance, Alhaji Gidado Mohammed; and commissioners for finance and accountants-general from the 36 States.

At the FAAC meeting, revenue amounting to N413.277 billion was distributed among the federal, state and local governments.

Babalola called for the harmonization of the various economic policies of the tiers of government in order to achieve medium term credibility.

"A significant challenge we face is the harmonization of the various economic policies of the tiers of government. Clearly, the short-term effectiveness of these policies will depend on their medium-term credibility.

"To retain their credibility, exit strategies will be needed to convert fiscal and monetary policies from extraordinary short-term support to sustainable medium-term frameworks," he said.

The minister told FAAC members that President Goodluck Jonathan had directed the Department of Petroleum Resources (DPR) to henceforth generate monthly oil production statistics for reconciliation in the second month after the month of data gathering.

This directive, Babalola explained, had become necessary to address the problem of recoveries for overpayment and underpayment to state from the 13 per cent derivation computation due to the lateness in the release of derivation indices.

"Furthermore, Mr. President has also directed that the Revenue Mobilization, Allocation and Fiscal Commission (RMAFC) should ensure that the figures so generated are used for the computation and sent to the Federal Ministry of Finance for revenue allocation by the third month following the initial month of data generation," he revealed.

On the N450 billion owed the Federation Account by the Nigerian National Petroleum Corporation (NNPC), the minister confirmed that the Corporation had written the Federal Ministry of Finance to explain that it was experiencing financial difficulties as a result of the disequilibrium between costs and cash inflow streams.

The NNPC, according to the minister, also requested for a reimbursement of N1.156 trillion from the Federal Ministry of Finance in order to repay its debt of N450 billion to the Federation Account.

The Federation Account Allocation Committee (FAAC) shared the sum of N413.277 billion among the three tiers of government, out of a total revenue collection of N607.386 billion in June 2010.

Giving the breakdown, Babalola explained that statutory allocation accounted for N361.25 billion of the total revenue distributed as against the N340 billion shared last month, while the Value Added Tax (VAT) was N52.027 billion compared to the previous figure of N40.543 billion. There was no increase from the domestic excess crude account.

"The distributable Statutory Revenue for the month is N361.25 billion which shows an increase of N21.119 billion or 6.21 per cent compared to that of May 2010. The increase was attributable to improved production as a result of re-opening of Trans Forcados, EA Terminals and Nembe Creek trunks line as well as Force Majeure lifted in Brass Terminal", he said.

"In addition, improved tax drive and increase in the volume of import had positive impact. There was no Exchange gain and augmentation because the prevailing exchange rate of N147 per US dollar is lower than the N150 benchmark; and the revenue inflow for the month is higher than the monthly approved figure."

The 13 per cent derivation accounted for the balance of the statutory allocation of N35.361 billion.

The states got the lion’s share of the VAT distribution of N26.014 billion (50 per cent); closely followed by the Local Government Councils, which received N18.209 billion (35 per cent). The Federal Government received 15 per cent of the distributable VAT, amounting to N7.804 billion.