My life as cook in Biafran feeding centre – Okpala 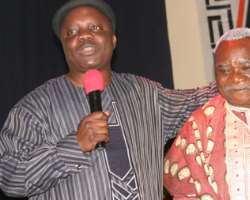 Chika Okpala , a.k.a. Zebrudaya was recently rumoured dead, but the ace-comedian had since dispelled the rumour, affirming that he is still as strong as the rock of Gibraltar.

Zebrudaya as he's fondly called by his fans in this exclusive interview with us went down memory lane to recount how his acting career started off, advising however that government should help in training young people who could use their talents to fend for themselves instead of roaming the street in search of non-existing white-collar jobs.He also shares his early life experiences dating back to the period the Nigeria/Biafra war ended. He is his humourous self.
Enjoy.

What is Chief Zebrudaya Okoroigwe Nwogbo been up to in recent times?
I have just completed the production of a new project and only a few day back, I was given a rough copy. That is, an unedited version of the series that was shot in conjunction with some people in the United States of America. There are other projects in the pipeline, but my role on TV drama as Chief Zebrudaya Okoroigwe Nwogbo alias 4.30 has remained my most popular role ever.

What about the palm wine powerless bit?

So, how did you come about the stage name Zebrudaya and others?

Zebrudaya was a set name as you know. Usually, when a writer conceives an idea about a TV/movie script, he must pick names for the characters in the scripts. And in choosing a name, he must be flexible with the characters because along the line, he may have need to replace them. In other words, he must be prepared to change a name if there is a better name to replace the one he initially used in his script.

And that was the case of Chief Zebrudaya when the original writer James Iroha (Gringory) wrote his scripts. He wanted that name Zebrudaya because he felt it had some weight, some carriage and that it would go far and wide, and it actually did.

The series succeeded because of who played the lead roles. If you don't have a good lead role, the show dies. So that's how that name came about.

It was created by James Iroha, the original writer and producer of The Masquerade.

When I took over the production, it became The New Masquerade and I formed a team of writers because I had a vision of long life for the programme. My belief was that if you keep one writer for too long, you'd get to the end very soon. But with a team of writers in-fussing new ideas into the scripts, the series will last long.

So how did you and the rest of cast on The Masquerade meet?

James Iroha and I met in 1970, when I was still in school. But schooling was tough and haphazard for me because my parents didn't have enough of the Nigeria currency to pay for my fees. We had plenty of the Biafran currency.

It was even tougher because my father had ten children and two wives. It was really tough and feeding was something else. And since most of us were still in high school, we had to fend for our selves.

My father tried his best and at a stage he simply gave up and said “well, I have tried oh. The war scattered everything for me, so you guys have to help yourselves. Those of you who have managed to acquire at least secondary school education, should find ways of taking care of yourselves.”

Hmm . . . I hadn't even gone up to standard six. So I came into Enugu and joined the Red Cross Society. I was lucky to be posted to a feeding centre where I became part of a team that catered for people who came in from the hinterland to Enugu to forage for job, food and shelter.

At the Red Cross camp, we cooked and every day, the people lined up in the morning, afternoon and evening to be fed. I was in charge of one of the feeding centres and so my food was secured (Laughs).

During the war we had a play group that I and my friend, Dr. Oguagu formed. He came up with the idea that we should form a Two-City play house with one other guy called Okpala and some people from the neighbouring town, Awka-Etiti. I'm from Nnobia with Oguagu.

With the Play House in place, we started performing around us instead of joining other young men who had become emergency hunters to make ends meet.

When I came back to Enugu I had only the raw acting talents that I had developed as a member of my school's dramatic society. On my arriving the Coal city, I hooked up again with my old partner and friend, Dr. Oguagu who told me they had something seriously going on, at the British Council. And wanted me to join them.

He also told me that “everyone in the broad casting house is there and you will be rubbing shoulders with the -who- is -who in the industry.”

One day, I went there after my job at the Red Cross feeding centre and they were rehearsing the play, Sons and Daughters. James Iroha was the producer.

I was initially uncomfortable on the set because all of those guys were graduates from the Universities of Ibadan, Lagos and Nsukka. But I braced up for the any eventual challenge because I wanted to outshine all of them.

After my introduction to the producer, James Iroha and Davis Ofor (Clarus), I was told that casting had ended, but I stood a chance of getting a role, if they decide to have stand-by cast.I was casted as stand-by for the role of Awure on the set.

We I moved from there to the radio house where they were recording a radio show called in The Lighter Mood, a drama series. It was at the radio station that I met the guy who was to eventually play the role of Chief Josephat Okoronwogbo alias 4:30 on The Masquerade.

In the Lighter Mood became popular and everybody in town was like “have you listened to Chief Josephat Okoronwogbo and the ways he x_rays happenings in the society? Ha, that man talks rubbish but he makes sense with all his grammatical errors.”

Soon the thing suddenly cut fire and we found ourselves rehearsing for it alongside Sons and Daughters.
When we felt mature enough to go stage with both drama series, we invited the then Administrator of now defunct East Central States, late Dr. Upkabi Asika. After seeing us perform, he was so impressed that during the Nigeria Army week that year, he took us to Kaduna. That was my first time entering a white train.

Ohoo! You see now, you have to know what a train is first, before you talk of a white train. (Laughs)

White train is the executive train that was used by the administrator or the Governor whenever he travels.
It was painted white and had certain luxurious facilities that were not fitted in other couches. So we traveled in a white train and I was so elated. After the Kaduna trip and loaded with the many gifts we received, I resolved to take drama production seriously.

Did you leave the Red Cross at this point?

When we came back from Kaduna, James Iroha started rehearsing us and improving on In the Lighter Mood.
Encouraged by our passion, Dr. Asika employed the services of Obi Egbunna who had just returned from the United Kingdom as a Writer in residence.

We were happy with the development because apart from our usual rehearsals, Egbuna taught us how to read and write our own plays.

He had also had his own script titled, Wind versus Polygamy. And I played the part of a hunter in the series.
Soon television production was reactivated in Enugu and the same writer in residence was made Director of programmes in East Central State Broadcasting Service ECSBS/ TV.

Following the development, we decided to air our productions, In the lighter mood and Wind vs. Polygamy.
They were both live programmes because the radio and TV stations had no recording facilities at that time.
So, the man who was playing teh role of Chief In the lighter Mood was also the same man that played Chief Ozumba in the Wind vs Polygamy.

When In the lighter Mood was re-christened The Masquerade and was to be aired astelevision programme,Chief Josephat Okoronwogbo's role was changed to Chief Zebrudaya and that was when the entire cast decided to try me as Chief Zebrudaya.

I was originally playing the role of Natty because I was very slim. And when I tried out the new role, it was a jackpot.
Most people said 'it is now we have the real Josepht Okoroigwe Nwogbo alias 4:30 but others expressed their reservations over my tenses and grammar. I didn't mind the criticisms and I made my own input to really make my character look the half baked, uneducated and igbotic high Chief.

That was how Zebrudaya was born. I had to do more research work to be able to raise the bar with my jaundiced grammar.

When we finally hit the screen, I had to be padded to make me look fat. People thought I was that fat but I was not.
And how did Ovularia and other characters join the TV drama?

But with the creation of Imo and Anambra, some casts in Enugu did not come along. We had to replace Okoro and Natty. Natty you know hails from Imo. Ovularia and Jegede were also drafted from Imo at that time.
Jegede was thought to be a Yorubaman . . .

Yes, because he was consistent with his character and the language just like Chief Zebrudaya whose character typified a half literate Igbo Chief who tries to convince you he was very educated. That's how real characters are made.

And where is Ovuleria now?

Ovuleria lives in Lagos. She is very much around.

Are you not thinking of reassembling the group again?

If we have sponsors, it will be a fine idea. I cannot cater for the production and at the same time, sponsor the programme.

Give me a sponsor today and in three weeks, we will be on air. The scripts are there and the original characters except for Jegede are alive.

Do the young people come to you for mentorship?

There are those who want us to help them develop their skills as actors or as writers, we have helped them.

We have never seen your face on any home movie, why?

I'm a member of the Actors Guild of Nigeria but you know home video production means having all the time to spend at that market where marketers come to pick artists. I have my office here and if the marketers want to use me, let them come and tell me. One or two persons came and I starred in their production.

Don't you think we need an academy where younger actors and writers could be trained?

We tried on our own to have it but it was not easy without government support. We had a body called, Independent Television Producers of Nigeria and I was the Vice President. For several years it was difficult to put resources together and to pay the bills. But if government had come to our aid, we would have provided a base for talented Nigerian youths to develop their skills.