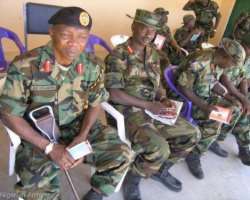 PHOTO: SOME SENIOR OFFICERS OF THE NIGERIAN ARMY.
Listen to article


ABUJA, July 07, (THEWILL) - The Nigerian Labour Congress (NLC) and the Trade Union Congress (TUC) Wednesday opposed the proposed amendment to the 2004 Pension Act, by the National Pension Commission (PENCOM) seeking to exclude the men of the armed forces from the new contributory pension scheme.

But the Director General of PENCOM, Mr. Muhammad Ahmad, has insisted that before the commencement of the scheme in 2004, there was wide consultation with stakeholders.

Both unions made their positions known at the public hearing organized by the House of Representatives committee on Pensions in Abuja.

Representative of the NLC, Mr. Peters Adeyemi while rejecting the proposed amendment explained that the proposed exemption of the military would trigger a situation that would undermine the sanity the present scheme has brought into the administration of pension in Nigeria.

"Whatever the arguments for the exemption, we in the congress are of the opinion that the National Assembly should be extremely cautious in considering this proposal, in order not to return pension to its 2004 era.

"We should therefore either individually or collectively desist from taking any decision that will throw the pension into chaos," he said.

He suggested that instead of allowing the military to exit, government should opt for making full contributions for the military as against the current payment of some percentage for them.

It will be recalled that under the contributory pension scheme, the employers and employees pay 15 per cent as contributions to the scheme.

In his presentation, National President of TUC, Mr. Peter Esele, noted that any attempt to exclude the military from the current scheme would trigger demands from other sectors of the country.

He said the agitation by members of the military would only undermine the continued workability of the scheme which was introduced to correct anomalies witnessed in the previous scheme.

While defending the position of PENCOM, the Director General, Muhammad Ahmad promised that issues raised by stakeholders would be addressed administratively while saying that the delay in payment of contributor’s money was due to late submission of documents by retirees.

According to Ahmad who admitted that there were challenges, the current pension asset was N 1.78 trillion as at May and advised against policy reversal as it was counter productive to the development of the nation.

Supporting the proposed amendment, chairman of Military Pension Scheme, Brig-General Bitrus Kwaji, explained that the military’s resolve to exit the scheme was borne out of some challenges confronting the scheme.

"The challenges of the contributory pension scheme as faced by military retirees have now added impetus to the call for reverting to the old pension system of pay as you go," he said.

He said inconsistencies in payments made by the various Pension Fund Administrators (PFAs) to officers of same ranks and same years of service were a serious challenge to the scheme.

According to him, the military pension board was repositioned to effectively cater for its personnel as has complied with the e-payment policy of government and timely payment of monthly pension to retired officers.

Also kicking against the amendment, Mr. Funsho Doherty, Chairman of Pension Fund Administrators association of Nigeria said that the proposed amendment would portend danger for administration of pension in the country.

He noted that the exiting of military for the scheme would not address the problems confronting pension administration in the country saying that pension was a significant component of economy.

Doherty assured that the delay and inefficiency identified by the military and other Nigerians would be adequately addressed.