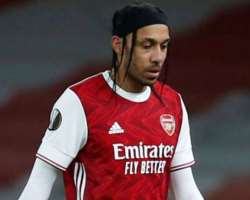 The 31-year-old has been out of action for the Gunners following a Malaria diagnosis while on Gabon assignment.

While recovering from the illness, the news that grabbed headlines was the newly unveiled plans for a Super League in Europe – with Arsenal confirmed as one of the 12 founding members.

Irritated about how the condemned competition had taken over social media more than significant subjects like Covid-19, online abuse or racism, the 2015 African Player of the Year decided to yank off his Twitter account.

“I ain’t missed you Twitter. So, we not allowed to talk about anything? Only football and Super League? No more talking about Covid?! Or online abuse or racism...nice. Even sick (without fone), I was feeling better than now with fone (sic) let me turn it off. See u,” his last tweet read.

The Gunners’ skipper was due to meet with captains of other English elite division clubs to discuss the Super League proposals.

Liverpool skipper Jordan Henderson is set to lead an emergency meeting as the fallout from the planned new European Super League continues.

It is believed that the players, the vast majority of whom had no idea that the Super League proposal was coming, have been left puzzled by events of the last 48 hours.