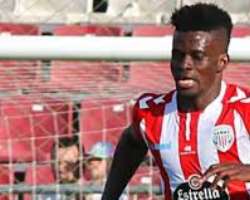 Nigeria international Ramon Azeez has been loaned to FC Cartagena from Spanish topflight side Granada.

In the 2019-20, the Super Eagles midfielder featured in 25 LaLiga games with two goals to his credit as the Nasrids finished in seventh position - which earned them qualification for the Europa League second qualifying round.

This campaign, however, he seemed to have been frozen out of Diego Martinez’s squad, playing a meagre two Spanish topflight games. Notwithstanding, the 28-year-old will continue the rest of the season with the Spanish second tier outfit in a bid to get regular playing time.

“Granada Club de Futbol and FC Cartagena have reached an agreement for the transfer of the midfielder Ramón Azeez until the end of the season,” the LaLiga side announced on their website.

“The player, a member of the squad since January 2019 and who was part of the promotion to the First Division. The club wishes him luck in this new sports career.”

At the Estadio Cartagonova, the Super Eagles midfielder’s experience would prove crucial in helping the struggling Albinegros avoid demotion at the end of the season.

With 21 points from 23 outings so far, Luis Carrion's men occupy the 21st position in the Smartbank log - one point above Alcorcon who sit at the base.

Baring any obstacles, Azeez could make his debut when Cartagena - who are without a win in their last seven games host Real Oviedo in a league encounter on Saturday. (Goal)