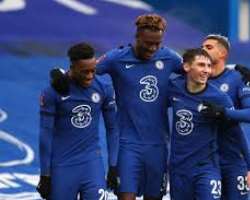 A Tammy Abraham hat-trick secured Chelsea victory over Luton Town in the FA Cup fourth round to relieve some pressure on manager Frank Lampard.

Abraham slotted in from Timo Werner's cut-back before nodding in a second from Reece James' chip.

Jordan Clark scored for the visitors - after an error by keeper Kepa Arrizabalaga- on 30 minutes to keep them in the game.

But Abraham poked home to seal victory before Timo Werner missed a penalty.

Chelsea will face Championship side Barnsley in the fifth round.

Watch all the goals from the FA Cup fourth round
Chelsea - who won the competition in 2018 and were beaten finalists last season - were in complete control at 2-0 and Christian Pulisic and Abraham both went close to increasing their lead.

But Luton, who edged past Reading in the last round, settled into the game after James Bree crossed in for Clark to squeeze his shot under Kepa, who should have done better.

The Blues were sloppy at times in the second half and Luton had chances, Kepa saving from Harry Cornick and Tom Lockyer to redeem himself after the earlier error.

Callum Hudson-Odoi replaced Pulisic on 70 minutes and made an immediate impact, having a shot blocked with with his first touch before setting up Abraham with a low cross for Chelsea's third goal.

Werner, who scored his first goal in 13 games against Morecambe in the third round, had the chance to make it 4-1 five minutes from time after being tripped in the box by Clark, but saw his spot-kick saved by Luton keeper Simon Sluga.

It was a welcome victory for Lampard, who has come in for criticism over Chelsea's Premier League position - they sit ninth in the table after five defeats in their past eight games. (BBC)