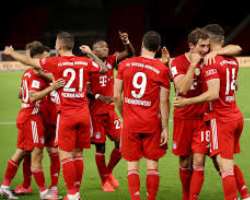 European champions Bayern Munich will meet either Qatar's Al Duhail or Egyptian side Al Ahly in the semifinals of Fifa's Club World Cup, after Tuesday's draw in Zurich.

Al Duhail and Al Ahly face each other in match three of the competition, which will be staged on 4 February.

Mexican side Tigres UANL have been drawn against South Korea's Ulsan Hyundai in match two, with the winners going on to face the winner of this year's Copa Libertadores between Brazilian sides Santos and Palmeiras in the other semifinal.

The 2020 edition of the tournament, which was originally scheduled for December, is now being held from 1-11 February in Qatar and brings together continental champions from across the world.

Auckland City, who were originally scheduled to play Al Duhail, withdrew from the tournament last week due to the Covid-19 pandemic and quarantine measures required by New Zealand's authorities.

As a result, the Qatari side entered the tournament in the second round. (Reuters)