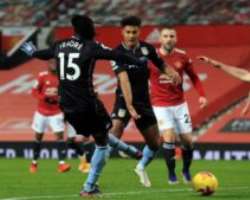 Manchester United kicked off the New Year by underscoring their title credentials with a 2-1 victory over Aston Villa that moved them level on points with Liverpool at the top of the Premier League.

Anthony Martial’s second league goal of the season and Bruno Fernandes’ second-half penalty were enough to see off a spirited Villa, who equalised through Bertrand Traore and pushed United all the way in an entertaining contest at Old Trafford.

United are now 10 games unbeaten in the Premier League and level on points with champions Liverpool, who they trailed by nine points when they last tasted defeat against Arsenal on November 1.

Subs: Davis (n/a), Ramsey (5).
Man of the Match: Paul Pogba How United got past spirited Villa…

United made the brighter start but were unable to find the early breakthrough as Fernandes, Martial and Harry Maguire were all denied by Villa goalkeeper Emiliano Martinez.Advertisement

Villa stood firm in the face of the early onslaught and then drew a line under it, with John McGinn’s 12th-minute near-post drive forcing a save from David de Gea which sparked the visitors into life.

Villa displayed all of the hallmarks of a side on a five-game unbeaten run and limited United to shots from distance, as Fred and Paul Pogba both failed with attempts to grab the initiative.