Man. United out of UEFA Champions League, headed to the Europa League 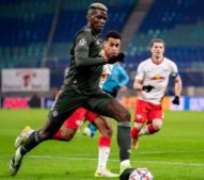 Leipzig's 12 points are three more than United and PSG, who holds the tiebreaker on the Red Devils and did not play its match following allegations of racial abuse from the fourth official towards Istanbul Basaksehir assistant Pierre Webo .

The Red Devils snapped to life in the second half and Bruno Fernandes scored an 80th-minute penalty for United and substitute Paul Pogba nodded home off a corner kick but it was too little, too late.

1. Nagelsmann tempts Ole's tactical acumen, United resilience: The visiting Red Devils have developed a reputation for comebacks, but down 2-0 on the continent in a potentially season-defining game was a much bigger challenge than any of United's comebacks this season (especially with Paul Pogba left at home). United was cooked out wide despite having two fullbacks playing in the midfield of a 3-4-3, as Leipzig boss Julian Nagelsmann targeted width and space going forward, making it look like United rolled out a formation without telling the three center backs and two wide men their defensive responsibilities.

Solskjaer responded at halftime by taking off Alex Telles for Donny van de Beek. At the hour mark, he plugged Paul Pogba and Brandon Williams into the fray for Nemanja Matic and Luke Shaw. Those midfield moves helped United control the second half but the margins for error were so thin and a critical mistake allowed Leipzig to add a decisive third goal.

2. Pogba changes game in shot across Solskjaer's bow: Is the situation going to be untenable for Solskjaer at Old Trafford after Pogba came off the bench and changed the entire game one day after his agent Mino Raiola said Pogba is being misused and headed for the exit at Old Trafford?

[ RELATED: Solskjaer tears into Raiola after the game ]

Pogba and Donny van de Beek were both very good off the bench but that will earn more questions toward Solskjaer, who has rarely started the latter and whose use of the former has been controversial at best. As our own Joe Prince-Wright said, Pogba played the ball that led to Greenwood's penalty and then scored a goal of his own before sending a late cross that could've well led to a qualifying equalizer.

3. That said, both the backs and attack bear the blame: United got nothing cooking in the first 20 minutes while Leipzig sent in cross after cross thanks to the Red Devils' wide men. The center backs didn't do much, either.

But Mason Greenwood and Marcus Rashford did very little with Bruno Fernandes service as United went down 2-0, and Scott McTominay and Matic underneath them were not a threat. Fernandes had multiple chances as the game wore on and the Portuguese was the Red Devils' best hope even after Greenwood awakened to tempt the frame and win a penalty kick that Fernandes snapped past Gulacsi.

4. Man City man cooks United ahead of derby: For whatever reason, Pep Guardiola's hole at left back is not Angelino sized and that was a huge problem for Solskjaer as the Spaniard has torched many opponents this season.

Angelino was all over the pitch again Tuesday, a left-wing back or left mid depending on how you view Nagelsmann's 3-4-3 (USMNT star Tyler Adams has said wide men are often playing several positions over 90 minutes under Nagelsmann). He has seven goals and five assists in 17 appearances for the Germans this season. Americans Abroad

Tyler Adams subbed into the match for the final 12 minutes and saw both goals of United's comeback bid. He picked up a yellow card, won a duel, made an interception, and one tackle. Man of the Match: Angelino RB Leipzig – Manchester United recap

Two teams that went deep into their European tournaments last season were not worried by the occasion.

The Bundesliga hosts took the lead through ex-Man City man Angelino, who continues to thrill in an advanced role with Leipzig.

Mason Greenwood forced a ninth-minute save out of Peter Gulacsi within minutes, United's urgent push for an equalizer underway.

Angelino found Forsberg in the heart of the box moments later but the Swede missed just wide.

United grew into the game near halftime and totally dominated in the early stages of the second half. The Red Devils still needed two goals with no Leipzig reply.

Fernandes had a shot blocked after the hour mark and then struck the cross bar with a 67th-minute free kick.

It was 3-0 when Wan-Bissaka's sloppy play led to a giveaway, and Angelino's cross was ignored by Harry Maguire in the expectation of David De Gea claiming it.

Kluivert was there to reap the rewards of United's miscommunication.

Fernandes converted the Greenwood-won penalty and Pogba nodded a back-post header off the leg of Dayot Upamecanoo and past Gulacsi for 3-2. Champions League news