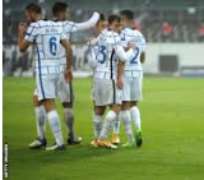 Lukaku's double gave Inter their first victory in the Champions League this season in a rollercoaster game, blowing Group B wide open ahead of the final round of group matches next week.

"A leader? I'm just one of the 25 players in the squad," said the Belgium striker. "There are a lot of players who have more experience than me. I just want to help the team win, that's my only motivation on a daily basis.

"I have been playing the best football of my career for a year and a half."

It was another match-winning performance from Lukaku, who now has 13 goals in 15 European games for Inter, and one which left Gladbach midfielder Christoph Kramer scratching his head.

"If you mark him the whole time, then they play around him, so it's a balancing act. But that's Inter for you. They have so many different facets to their game, and they showed that today," Kramer told broadcaster DAZN.

Gladbach still sit on top of the group after Shakhtar Donetsk beat Real Madrid 2-0 earlier on Tuesday, but they are now just three points ahead of bottom side Inter.

With just a single point separating the top three sides, all four teams still have a chance to qualify next week.

"We could have avoided unnecessary suffering (in the group), but we are alive and that is the most important thing," said Inter coach Antonio Conte, who is bidding to avoid his fourth Champions League group-stage exit as a coach. (Reuters)