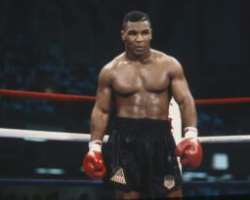 While Tyson has remained adamant that he has never used performance-enhancing drugs, his recent comments have certainly raised some eyebrows. For those of you who are not aware, a “whizzinator” is a fake p***s that leads to a tube of untainted urine. Mike accepted that he has used both his wife's and his kid's urine to pass the tests. (Original Caption) 1/22/1988-Atlantic City, NJ Ferocious faced Mike Tyson lands the knockout punch to the jaw of challenger Larry Holmes during fourth round of the World Heavyweight Championship.

Tyson said , “It was awesome, man. I put my baby's urine in it. And sometimes, one time I was using my wife's and my wife was like 'Baby you better not hope that it comes back pregnant or something.' And I said Nah, so we ain't gonna use you any more, we're gonna use the kid. Cuz I got scared that the pi** might come back pregnant.” Tyson said.

In the past, there have been incidents where athletes have been caught using their wife's urine after the results indicated pregnancy.

Page lead photo: ATLANTIC CITY, NJ – JULY 21: Mike Tyson stands in the ring during the fight with Carl Williams at the Convention Center on July 21, 1989 in Atlantic City, New Jersey. Tyson defeated Williams in the fifth round with a TKO. (Focus on Sport via Getty Images)