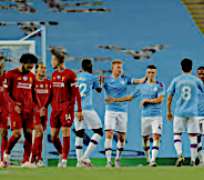 Liverpool's hopes of returning to the Premier League summit were frustrated as they fought out a high-quality draw at Manchester City, who paid a heavy price for Kevin de Bruyne's missed penalty.

Liverpool, who knew victory would see them leapfrog Leicester City and Tottenham, reaped an early reward when Salah put them ahead from the spot in the 13th minute after Kyle Walker brought down Mane - but City levelled just after the half-hour when Gabriel Jesus turned superbly before slotting past Alisson.

Pep Guardiola's side wasted a golden chance to go ahead before half-time when De Bruyne rolled his penalty wide after handball had been awarded against Joe Gomez following a lengthy video assistant referee (VAR) deliberation.

Both sides pushed for the winner but it was City who grew stronger as the game went on, Jesus sending a glorious headed chance wide to leave both sides having to settle for a point.

Klopp did not come to the Etihad to hide behind the door - Liverpool's attacking formation that had City on the ropes for the first 20 minutes was proof of that.

In the end, however, you suspect he will be happier with a point than Guardiola as the Reds clearly ran out of steam in a second half when the home side looked far more likely to snatch the winner.

This is a Liverpool team already missing Virgil van Dijk, Fabinho and Thiago Alcantara - and they also lost Trent Alexander-Arnold in the second half - but they still came to a formidable opponent and refused to be beaten.

Even on the back foot, the reigning champions carry an unmistakeable air of menace in the shape of those attackers - particularly Salah and Mane, who were always on the prowl.

Liverpool, uncharacteristically, grew sloppier in possession as the game went on, but they still managed to limit City's opportunities.

Klopp will never be fully content with a point but he will surely still be satisfied because his team showed real defensive resilience, apart from that moment in the second period when Jesus slipped the shackled and headed Ferran Torres' cross wide.

Liverpool are in third place in the Premier League, a point behind Leicester - and meet the Foxes at Anfield after the international break. (BBC)