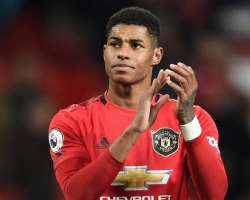 The footballer, 22, campaigned for the government to allow about 1.3 million children to claim free school meal vouchers in England's summer holidays during the coronavirus pandemic.

Rashford, who has asked Prime Minister Boris Johnson to extend that scheme, said the MBE was a "nice moment".

A Commonwealth Games 10,000m champion, Foster competed at three Olympics for Great Britain before beginning a commentary career in 1980.

He founded the Great North Run - the UK's biggest running event in terms of participation - the following year, and went on to cover nine summer Olympic Games for the BBC, retiring from commentary in 2017.

In rugby union, former Wales head coach Warren Gatland and Gareth Thomas - who played for the country in both union and league - have become CBEs, while Alun Wyn Jones, the team's current captain, has been appointed an OBE.

The Queen's Birthday Honours list was originally scheduled to be published in June, but it was postponed by the prime minister to allow nominations of people who played crucial roles during the first months of the coronavirus pandemic. (BBC)