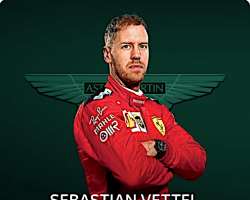 Four-time Formula One champion Sebastian Vettel will move to the Racing Point team being rebranded as Aston Martin for the 2021 season.

Vettel will replace Mexico's Sergio Perez, who confirmed Wednesday that he will not remain with the team beyond the current season. The German driver had been linked with Racing Point since Ferrari opted not to renew his existing deal beyond 2020.

Sebastian Vettel will stay in F1 beyond his six-year stint at Ferrari. Mark Thompson/Getty Images

In 2021, Vettel will partner Lance Stroll, son of Racing Point owner Lawrence. Thursday's announcement said he joins the team on a multiyear deal.

The news has been announced ahead of Ferrari's 1,000th race, the Tuscan Grand Prix at the Mugello circuit owned by the Italian team. Vettel won four straight titles at the beginning of the 2010s with Red Bull but was unable to claim a championship for Ferrari since joining in 2015.

"I am pleased to finally share this exciting news about my future," Vettel said. "I'm extremely proud to say that I will become an Aston Martin driver in 2021.‍

"It's a new adventure for me with a truly legendary car company. I have been impressed with the results the team has achieved this year, and I believe the future looks even brighter.‍

"The energy and commitment of Lawrence to the sport is inspiring, and I believe we can build something very special together.‍ I still have so much love for Formula One, and my only motivation is to race at the front of the grid. To do so with Aston Martin will be a huge privilege."

The news that Vettel will remain on the F1 grid means that the three most successful drivers of the modern era will be racing in F1 next year, with Fernando Alonso (champion in 2005 and 2006) returning from a two-year hiatus to join Renault. Lewis Hamilton is likely to finish the season as a seven-time world champion. (ESPN)