Ronaldo explains why Real Madrid should sign Mbappe over Neymar 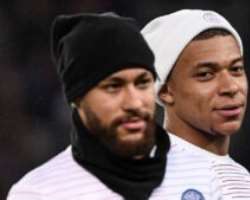 Mbappe has been tipped to make the move to Madrid at some stage in his career, with Los Blancos reportedly eyeing a 2021 transfer.

Former Barcelona forward Neymar – who joined PSG in a world-record deal in 2017 – has also been linked to Madrid previously.

But Brazilian legend Ronaldo, a La Liga winner with Madrid in 2002-03, prefers France’s Mbappe over countryman Neymar due to age.

“Right now, it is not that one is better than another, but if Real Madrid had to make a big investment, they should do so thinking about the future,” Ronaldo said during a webinar hosted by Santander.

“Neymar is 28 years old and Mbappe is 22. As an investment, it would be more logical to bring the younger [of the two].”

Mbappe and Neymar are preparing for Sunday’s Champions League final against Bayern Munich in Lisbon.

“He needs to win the Champions League to complete his season,” Ronaldo said of Neymar.

“He has played very well in the last few games, especially in this final phase in Portugal.

“He has created many scoring chances, but he has lacked calmness to finish off moves. With luck and calmness, he can find himself scoring in the final.”

“It is very unlikely that Messi will leave Barcelona, especially with the financial crisis in Europe,” he said.

“Messi is the reference of the team and if I was Barcelona I would not let him leave in any case.

“Messi has a very intense relationship with Barcelona, I do not think he will stop being in love with the team. He’s upset, of course, with how they were defeated in the Champions League.

“Messi needs his team-mates to help him, as they do, and Barcelona will have to think of something different for the next seasons. Letting your main player leave is not the solution.”Yahoo Sports