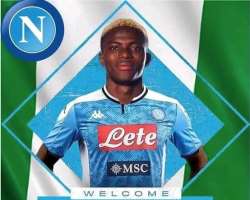 Napoli have completed the signing of Super Eagles striker, Victor Osimhen for a club-record fee of €50m from Lille.

The 21-year-old has joined the French Club from Charleroi last summer for a reported fee of €14m.

The former Wolfsburg striker has signed a five-year contract with Napoli.

Osimhen impressed at Lille in his first and only season with the Les Dogues scoring 18 goals in 38 appearances in all competitions including a memorable goal against Chelsea in the Uefa Champions League.

He was linked with a move to various European Clubs but he has chosen to continue his development with Napoli in a big-money move.

Osimhen won Lille’s player of the season and he was also named in the Ligue 1 team of the season following his goalscoring exploits in the league.

He has scored four goals in 10 appearances for Nigeria, he was part of the Super Eagles team that won the bronze medal at the 2019 Africa Cup of Nations.

Osimhen becomes the most expensive African Player with his €50m move to Napoli.