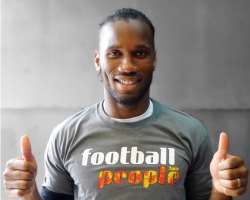 In a letter dated on Thursday and addressed to the president of the AFI Cyrille Domoraud, FIFPro said it was suspending his organisation "with immediate effect."

The letter said that this "exceptional intervention" was motivated by "extreme urgency".

The AFI decided last week to not sponsor Drogba to run for the presidency of the Ivorian federation (FIF) in the 5 September election and instead backed Idriss Diallo, the current FIF vice-president.

Candidates need an endorsement from one of five Ivorian football organisations to enter the presidential race. With only the association of medical staff yet to announce their endorsement, the former Chelsea and Marseille striker does not have a sponsor.

In its scathing letter, FIFPro attacked what it called the "iniquitous decision" of the AFI saying it is likely "to have a negative impact, in the Ivory Coast and beyond, on the defence of footballers, the chief objective of FIFPro and its members".

"Your decision shows a flagrant omission of this obligation and a total lack of consideration for your members," the letter continued.

FIFPro said the choice "is the result of various serious statutory breaches committed by the AFI in recent years" and had failed to take into account the "strictly democratic expression of the will of Ivorian footballers."

"The suspension means that the AFI immediately loses all its rights as a FIFPro member, and in particular its rights to income," it said. (AFP)