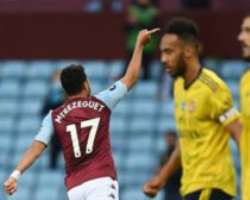 Aston Villa gave themselves the best possible chance of Premier League survival with a valiant victory at home to Arsenal on Tuesday night.

Egyptian talent Trezeguet got the vital goal in the 27th minute, which Dean Smith's side protected with their lives for the rest of the game.

Arsenal failed to turn up after their fantastic Wembley win and allowed Villa to capitalise from an outswinging corner by Danny Mings.

The Gunners, who came closest through an Eddie Nketiah header onto the post, are guaranteed their worst top-flight finish since 1995.

Meanwhile, Villa are out of the bottom three for the first time since February and their destiny is in their own hands at West Ham on Sunday.