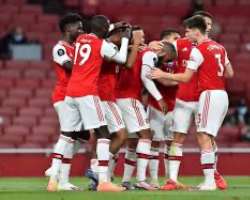 Liverpool suffered a 2-1 loss against Arsenal to end their hopes of setting a new record of points in the Premier League.

The Reds needed to win all their remaining games to beat Man City's tally of 100 points, which the Citizens set two seasons ago.

Saido Mane gave them a deserved lead in the 20th minute, when he finished off from a brilliant cross by Andrew Robertson.

The ever reliable Alisson's poor clearance gave Arsenal the opportunity to score the second goal as Reiss Nelson took advantage to give Arsenal the lead going into the break.

Liverpool tried all they could to get back into the game but Arsenal showed character and resilience to deny the Reds and earn a vital victory to boost their European place hopes.

Arsenal goalkeeper Emiliano Martinez made eight saves including an exceptional save to deny Mohammed Salah.

Arsenal defeated Liverpool in the Premier League for the first time since April 2015, while it is the first time Jurgen Klopp has lost against the Gunners in the competition after winning five and drawing three previously.

"I can't make something negative from something so positive, we get the points we deserve and we will see how many that will be. These boys played an exceptional season, nobody can take that away from them.

Tottenham defeated Newcastle 3-1 at St James' Park courtesy of a brace from Harry Kane and a goal from Son Heung Min.

Wolves and Burnley played out a 1-1 draw.