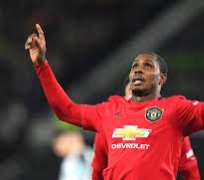 Odion Ighalo continued his impressive form at Manchester United with a goal against Norwich.

The former Super Eagles striker was handed a starting shirt by Ole Gunnar Solskjaer and he repaid his manager's faith scoring from his first shot to give the Red Devils the lead in the 51st minute.

Luke Shaw made a darting run into the box and delivered a superb cross which Juan Mata poked into the path of Ighalo, the on loan striker made no mistake as he converted from close range.

Todd Cantwell restored parity for Norwich as the game went into extra time.

Harry Maguire scored the winning goal for Manchester United in extra time to seal a semi final place in the competition.

The goal extended Ighalo's goalscoring run whenever he is given a starting shirt.

He has now scored in all his four starts for Manchester United totaling five goals.

Ighalo has created eight chances for his teammates with one assist.

Meanwhile, Ole Gunnar Solskjaer has praised Odion Ighalo for his performance against Norwich.

"It is great to have the option to rotate,” Solskjaer told BBC Sport. “Anthony Martial came on and did brilliant, but Odion gives me a chance to rotate.

"He's a proven goalscorer and played his part in both goals," the Norwegian coach continued. "He is a great person to have around the dressing room too.

“Odion knows how much we value him in and around the dressing room; he’s a goalscorer, a poacher, he’s strong, we can play the ball into him, he showed for the second and Paul [Pogba] found him.”

Manchester United are now unbeaten in 14 games across all competitions.