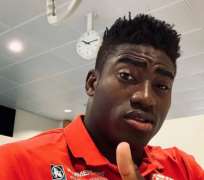 Nigeria Youth International, Taiwo Awoniyi has regained consciousness after he was knocked out cold in a Bundesliga match between his club, Mainz and Augsburg on Sunday.

Awoniyi was stretchered off and quickly rushed to the hospital after the incident.

The Liverpool loanee is now back on his feet according to his coach, Achim Beierlorzer.

"We have received the all-clear from the doctors. He has regained consciousness and can remember the things that happened,” Beierlorzer was quoted as saying by AFP.

"He has a severe concussion and has to stay in the hospital for observation."

The former U-17 star has played eleven times for Mainz in the Bundesliga scoring once since he joined from Liverpool on loan last summer.

Awoniyi has also taken to Social Media to thank his teammates and the club's medics for their support.

“Already on the road to recovery! Flexed biceps