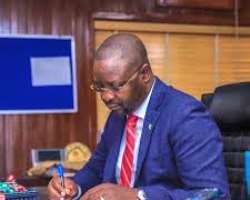 The Minister of Youth and Sports Development, Mr Sunday Dare, has revealed that there are certain clauses in Rohr's new contract which gives room for the NFF to sack him if he performs below par.

The NFF confirmed on Wednesday that Rohr had renewed his contract for another two years with the federation until December 31, 2022 but Dare revealed that Rohr had been handed a great opportunity to further prove himself on the job with the strict conditions stipulated in his new deal.

Dare told NTA in an exclusive interview "For Rohr to have come in, he must have been world standard,"

"With the conditions we have put in, I think it’s only fair to let him continue, if he has accepted, but then again, we are going to warn him (Rohr) to a great standard of responsibility, a greater depth in our football and a greater level of success"

"In that contract, there are points that if he does not meet the desired standard, we can terminate his contract."

"So we are not stuck with him, he has an opportunity to prove himself."

"Even if we bring in the best coach in the world, we will set the same standard for him, and if those expectations are not met, we will show him the door."

"We will let this play out, he has also made promises that things will get better and I think we will just wait and see what happens eventually."