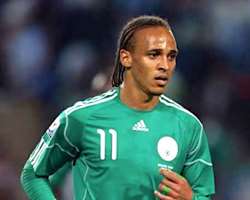 The embattled former manager of the Super Eagles, Samson Siasia, has threatened to take up legal action against former Eagles' winger, Osaze Odemwingie for making defamatory comments against him on the Super Eagles Instagram page some days back.

Osaze, was a guest on Super Eagles Instagram page was quoted by AOIFootball.com saying that he had issues with former Eagles’ coach Samson Siasia because he didn’t support his leadership.

The words of Osaze "During the Olympic Games in Beijing, there were some rumours among the players because I did not play the qualifiers, that some dodgy things were going on, part of which he is being accused of at the moment."

"I did not know the validity of it but there were talks of match-fixing. For us the players we played out our hearts and deservedly got to the final which everyone saw"

Osaze also revealed that his rift with Siasia was blown out of proportion. "After then I was asked by a Nigerian journalist if Siasia was the right man for the Super Eagles job. I paused in my response because I felt in my head that he wasn’t ready."

"The Olympic team was a mess and you can ask Keita because there were issues throughout the tournament and I think that caused our problem because I could not back his ambition."

Meanwhile, Siasia have come to threaten legal action against Osaze. In a chat with SPORTINGLIFE on Friday, Siasia said "Osas, I am still alive, you better show me your evidence or shut up . The next letter will come from my lawyer"