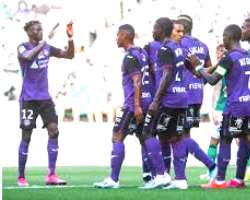 The Paris Administrative Court has rejected appeals by Amiens, Olympique Lyonnais, and Toulouse over the decision of the French football league (LFP) to end the 2019/2020 season early because of the coronavirus-induced suspension.

The LFP, which runs the top two divisions in French football, decided late last month to call an end to the season with 10 of the 38 scheduled rounds of games unplayed due to the coronavirus pandemic.

The decision, while confirmed Paris Saint-Germain as champions, also meant that the bottom two, Amiens and Toulouse, were condemned to relegation to Ligue 2.

A statement by the football governing body on Friday reads "The LFP was pleased to learn that the appeals lodged by Olympique Lyonnais, Amiens SC and Toulouse FC were rejected by the summary judge of the Paris Administrative Court,"

"In three orders issued on Friday afternoon, the court ruled that the general decisions taken by the League's board of directors on 30 April could only be challenged before the State Council, which is competent to hear regulatory decisions taken by national authorities such as the LFP," it continued.

Lyon, who have reached this season's Champions League's last 16, were left seventh in the standings and outside the European qualification places.

The President of Lyon, Jean-Michel Aulas had on the 8th of May revealed that two legal actions are on the way against LFP over its decision of ending the 2019-20 Ligue season in advance.

According to Aulas, money is not the major concern for Olympique Lyonnais. What really triggered the club's decision of turning to the law was the LFP's decision over which teams could attend European competitions next season.

On May 10, Lyon said the decision could see the division slip further behind Europe's top leagues and called for it to be reversed.

"There is still time, until May 25, to back off and avoid a huge rout for the French championship."

"How can we fight with our foreign competitors who, in the vast majority, chose to wait cautiously to restart their championship?," continued the statement.

Two days later, the relegated Amiens decided to launch legal proceedings in a bid to overturn what they consider to be their "unjust" relegation from Ligue 1.

Amiens were four points away from what would have been safety when action was suspended.

"We find that this decision goes against sporting fairness. The decision is a punishment from the league. It is unjust." the club's president, Bernard Joannin, said during a press conference on May 12.