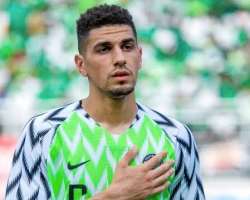 The Brighton defender who is on loan at championship club, Wigan has lost his place in the national team following his lack of regular playing time with the premier league club.

The former Mainz defender will be 34 years old when the next world cup is held in 2022.

"I would like to be part of another world cup, not just to be there as an experience guy who pushes the group I want to be involved on the pitch"

The Germany-born admitted that he lost his place too quickly in the team and he is hoping to win his place back in other to be an active member of the team in Qatar.

“Let’s see what other players come out until then, at the same time I still have to fight for my spot back. I still have to reclaim it, even though I feel like I lost it a bit too quick if you look at the past five years but anyways it’s just football”.

Nigeria will battle it out with Cape Verde, Liberia and Central African Republic in the second round of the 2022 FIFA world cup qualifier.