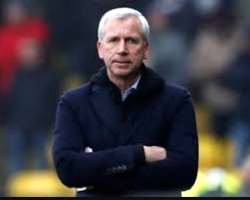 Pardew's side were 17th on the log and 7 points away from safety when it was announced on Friday that the Eredivisie season is cancelled without a league champion or relegation.

Some reports had suggested that the former Newcastle and Crystal Palace boss was to be given £100,000 windfall due to the cancellation of the the league.

Pardew however has rejected suggestions that the windfall was of that magnitude but did confirm that he was in line for a dividend, which he will pass on to others.

Speaking in an interview, 58-year old Pardew said “When I signed for ADO there was a bonus clause in my contract for avoiding relegation, however, the figure is not the one being reported by the press,”

“These clauses are standard practice in the majority of managers' contracts around the world."

“It was my understanding that this clause would only be activated if we had finished the season and ADO had avoided relegation. However, on a technicality issue with regard to the way the Dutch season ended, I was informed ADO intended to pay the bonus.

“I immediately contacted the club and told them not to pay me the money and to instead give it to the non-playing staff at the club or donate it to Holland's health service to help in their efforts to beat COVID-19.

Pardew's job with ADO is his first managerial job abroad, having managed Newcastle, Southampton, Westbromich Albion, Crystal Palace and a host of other clubs in England.