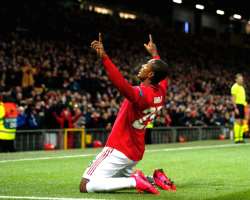 The former Nigeria international accomplished a boyhood dream by joining United on-loan from Shanghai Shenhua in January and Ferdinand feels that Ighalo’s desire to play for the Red Devils is refreshing.

The 30-year-old has scored four goals in eight appearances for United including a brace in the club’s 3-0 FA Cup win over Derby County.

“Wow, eight games, three starts in that, four goals and one assist. Ighalo, do you sign him for Manchester United now?” Ferdinand said during a Q&A on Instagram when asked about Ighalo as per Goal.com.

“All the people that out there that were saying: ‘What are we doing signing Ighalo? What’s going on? What’s Ole [Ole Gunnar Solskjaer] thinking?’ – I was one of them, I have to admit it.

“Ighalo’s been in China, the league’s nowhere near what the Premier League is so how is he going get up to speed? Is he going to be ready straight away? We need somebody to come and make an impact immediately. Coming from China, impossible.

“And I think he’s warranted the opportunity to come in as a full-time player and what he’s given Manchester United which they didn’t have is someone they can pass the ball into and can hold it up, he’s got a physical presence, he can hold off a defender or two and lay the ball in for someone else to score,” he concluded. (African Football)