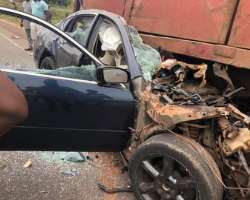 Former Nigeria Premier League champions, Rangers International of Enugu, have confirmed the death of one of its players, Ifeanyi George, as earlier reported by The Eagle Online.

The club, via its official Twitter handle: @RangersInt’lfc, announced the shocking death of the forward.

Reports claimed the late striker and two others were on their way to Lagos from Enugu when they ran under a trailer.

He also made his international debut for Nigeria in 2017.