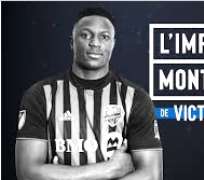 Victor Wanyama has completed his move to Montreal Impact from Tottenham on a free transfer, signing a three-year-deal with the club.

The Kenyan International ends his four years association with Tottenham, he enjoyed a successful first season before e started battling with series of knee injuries that made him lost his place in the team.

Wanyama has only played four matches for Tottenham this season and he will be hoping to revive his career under the guidance of Thierry Henry at Montreal Impact.

"Victor is an important player with a great career," Impact sporting director Olivier Renard said in a statement from Montreal.

"His undeniable experience will also help support the young players and help them progress."

Wanyama said the possibility of playing for Henry had influenced his decision to head to MLS.

"When I spoke to Thierry and he told me he wanted me to join him in Montreal, I didn't have to think twice," Wanyama said.

Wanyama is in line to make his debut against FC Dallas on Saturday.