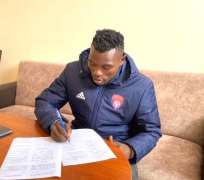 Edemdem Essien who was formerly a player of Hills FC, Uyo, Akwa Ibom and transferred to FC Vans through FIFA licensed agent and NFF intermediary Ojo Paul Omamomo before landing a professional contract with the Armenia First league club FC Vans will be playing the AFL team that is currently ranked 3rd on the table.

Essien is an indigene of Ikono in Akwa Ibom State, Nigeria and plays Defensive Midfield. The 22 year old defensive midfielder was based in Akwa Ibom and has played in several clubs and academies before he landed his professional deal. The Ikono born defensive midfielder is reported to have signed a two year contract with the AFL side.

Essien who is famously known in Akwa Ibom as Papi is expected to make his debut in the club’s first match for the season on the 28th of February.

While speaking to Ojo Paul Omamomo who is the players agent, he stated that the club was a good start for Ededem and hopes for more deals in the near future.