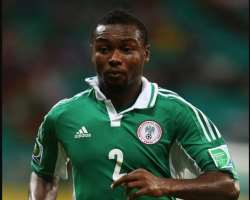 The former Sunshine Stars defender has been without a club since leaving HNK Gorcia.

Oboabona is now the second Nigerian at the club alongside Benjamin Teidi who is already a key member of the club.

He has been assigned shirt number 27 and he is expected to make his debut in their next match.

Oboabona played an integral role in Nigeria's Nations Cup triumph in 2013, playing all the six matches as the Super Eagles led by late Stephen Keshi won their first Afcon trophy since 1994.

He has had stints with Sunshine Stars, Rizespor and All Ahli.

The 29-year-old was selected for Nigeria's squad at the 2013 FIFA Confederations Cup, and was named in the provisional squad for the 2014 FIFA World Cup.

Oboabona's last match for Nigeria was in 2016 and he recently remembered his only goal for Nigeria in a tweet.

"I get goosebumps every time I watch my goal for the Super Eagles against Namibia. Can't wait to wear the green and white jersey again," he tweeted.