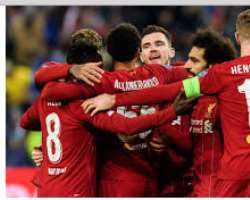 Liverpool continued their imperious form with a 4-0 drubbing of Southampton.

The first half ended goalless, Liverpool came out after the restart to annihilate the visitors.

Alex Oxlade Chamberlain opened the scoring just after the restart, Jordan Henderson made it 2-0 on the half hour mark.

Mohammed Salah scored a brace to complete the rout to give Liverpool another victory.

The Reds have now earned 100 points from 102 available to them in the premier league winning 33 out of their last 34 matches in the competition.

Chelsea and Leicester played out an entertaining 2-2 draw at the King Power Stadium, Anthony Rudiger scored a brace for Chelsea, while Harvey Barnes and Ben Chiwell scored for Leicester City.

Manchester United and Wolves played out a goalless draw at Old Trafford.

Bruno Fernandes made his debut for the hosts but he failed to add any spark to the team as the match ended goalless, he was booked in the 57th minutes.

The Portuguese international had five shots in the game more than any other player.

Manchester United have failed to score in three consecutive home games in the premier league for the first time since October 2016.

Everton fought back from two goals down to beat Watford 3-2 courtesy of a brace by Yeri Mina and a late winner from Theo Walcott.

Bournemouth defeated Aston Villa 2-1 to boost their relegation survival hopes, while West Ham and Brighton played out an entertaining 3-3 draw.

Sheffield United defeated Crystal Palace 1-0 to move up to fifth on the log, Newcastle and Norwich ended goalless.

Burnley are at home against Arsenal, while Manchester City makes a trip to North London to face Tottenham on Sunday.