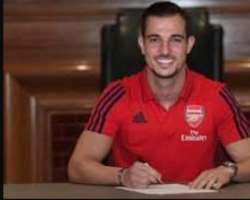 Arsenal have completed the singing of Portuguese defender, Cedric Soares on loan from Southampton until the end of the season.

The 28-year-old right back made over 100 appearances for Southampton since joining from Sporting in 2015.

Arsenal have had to play Bukayo Saka as a right back in the last few weeks.

Soares is expected to go straight into the team for their premier league clash against Burnley on Sunday.

Soares expressed his excitement after joining a "top club" like Arsenal

For me, Arsenal is a top team. They are a very, very good club, with fantastic fans as well.

They are known to be so well supported and for me, it's a pleasure to be here.

Like I said, it's a dream come true because I always thought about coming here and imagined it, and seeing it happen is really amazing.

Edu added: "I know he is a player who plays with absolute full commitment and energy. We are all looking forward to going into the last stages of the season with Cedric as part of the club."