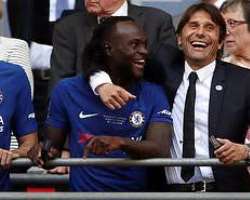 Antonio Conte is interested in signing Victor Moses as he aims to turn Inter Milan to a force to be reckoned with in Italy.

The Italian has led Inter Milan to the top of the league in his first season and he has impressed with his solid style of play.

Victor Moses enjoyed a fruitful time with Antonio Conte at Chelsea in 2017 when he was deployed as a right wing back.

Victor Moses played a key role as Chelsea won the league with an impressive 30 wins as a result of the change in formation which.

The former Super Eagles star is currently on loan at Fenerbache in the SuperLig.

Inter Milan remain in talks with Roma over a swap deal involving Spinazzola and Politano, however, the deal appears to have stalled and Conte is eyeing a reunion with Victor Moses as an alternative.

Victor Moses has made six appearances for Fenerbache this season and Chelsea are willing to recall him and send him out on loan to Inter Milan.