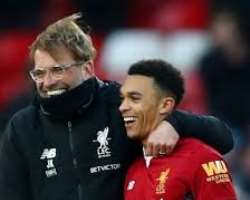 Alexander Arnold scored a goal and recorded three assists in December as Liverpool kept three clean sheets in the league.

Liverpool won all their five matches in the league in December.

The Reds are 13 points clear of Leicester City and they have gone a while year in the league without losing.

It will be recalled that Saido Mane was named the premier league player of the month following his impressive form in November.

Liverpool will hope to continue their winning run in the league when they visit Tottenham on Saturday evening.