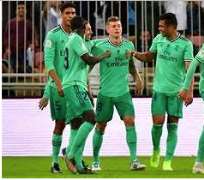 Real Madrid defeated Valencia 3-1 to book their place in the Super Cup final.

Toni Kroos gave Real Madrid an early lead by scoring directly from a corner kick while the Valencia goalkeeper was still organising his defence.

Isco increased Real's lead in the just before half time before Luka Modric added the third goal to take the clash out of Valencia's reach.

Daniel Parejo scored a late consolation goal for Valencia from the penalty spot to reduce the deficit, but it was too little too late as Real Madrid advanced to the final.

Barcelona will face Atletico Madrid in the other semi final on Thursday.

Real Madrid will slug it out with the winner of the Barcelona and Atletico Madrid clash in the final on Sunday.

The Spanish Super Cup has a new format this season which allows the top two teams from La Liga and the Copa Del Rey finalists playing in a four-team competition in Saudi Arabia.

Real Madrid qualified for the competition because Barcelona won the league and finished runners up in the Copa Del Rey losing against Valencia in May.

The Spanish FA signed a three-year deal with Saudi Arabia to host the Super Cup, it is the latest sporting event to take place there following Anthony Joshua and Andy Ruiz bout and Italian Super Cup between Juventus and Lazio.