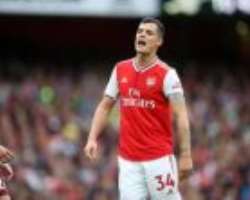 Former Arsenal Captain, Granit Xhaka is on the verge of sealing a move to Hertha Berlin.

Xhaka's future at the Emirates Stadium has been in doubt since he reacted angrily to being replaced against Crystal Palace in October.

The Swiss international clashed with Arsenal fans after they mocked him and he reacted by muttering some words and threw his jersey away and stormed off to the dressing room.

Few weeks later he was stripped of the captaincy and he was also overlooked for selection.

Xhaka has informed Arsenal about his intention to seek greener pastures

However, Xhaka's agent Jose Noguera claims the 27-year-old has a deal in a place with Jurgen Klinsmann's Hertha in the hope of completing a transfer in the January window.

"Look, I will say it frankly and honestly - we are in agreement with Hertha and would like to go to Berlin," Noguera told Blick .

"That's what we said to Arsenal's club boss Raul Sanllehi and sports director Edu Gaspar – as well as the new coach Mikel Arteta."

Granit Xhaka started the match against Bournemouth which ended 1-1 on Boxing Day.