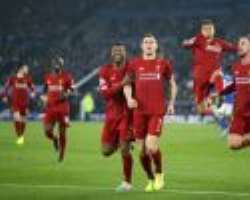 Roberto Firmino scored a magnificent header just before half time to give the visitors the lead from an excellent cross from Alexander Trent.

Leicester City capitulated in the second half when Roberto Firmino, James Milner and Alexander Trent goals condemned them to their heaviest loss this season at the King Power stadium.

Liverpool started the match with ten points clear of the hosts with a game in hand but they have extended it with a clinical performance.

Manchester United came from behind to beat Newcastle 4-1 at Old Trafford courtesy of a brace from Anthony Martial and a goal apiece from Marcus Rashford and Mason Greenwood.

Tottenham continued their resurgence under Jose Mourinho with a 2-1 victory over Brighton thanks to goals from Harry Kane and Dele Alli.

Carlo Ancelotti led Everton to a 1-0 victory over Burnley in his first match in charge since taking over at Goodison Park courtesy of a fine strike from Calvert Lewin.

Jordan Ayew came off the bench to help Crystal Palace to a 2-1 victory over West Ham with a goal to pile pressure on Mauricio Pellegrini.

Watford moved off the bottom of the premier league table with a battling 1-1 draw against Sheffield United.

Wolves will welcome Manchester City to the Molineux Stadium on Friday.

"I am happy about that. I appreciate it because I do not take it for granted and the boys have to do it every three days.

We had big chances at the start of the game, did not score with them but stayed in the game and controlled it.

"It is was difficult for Leicester to get into the game, both teams felt the intensity of the season but we controlled it more and maybe Leicester were not as aggressive, maybe because of us and our positioning.

We scored a first goal, super, super, cross from Trent Alexander-Arnold and Roberto Firmino can score from that situation.

Premier League action resumes on Saturday and Sunday with Arsenal slugging it out with Chelsea at the Emirates Stadium on Sunday.