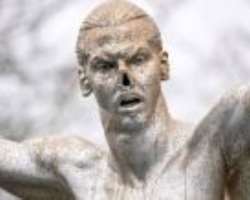 A Statue of Zlatan Ibrahimovic has been vandalized in his hometown because of his investment in Hammarby IF.

Ibrahimovic started his career with his hometown club Malmo before leaving in 2001 and he has played for a host of top clubs in the world of football.

Trouble started when Ibrahimovic bought 23.5 per cent of the shares in Hammarby and the decision did not go down well with Malmo fans who felt by Zlatan Ibrahimovic for investing in a rival team.

Hammarby finished behind Malmo last season on goal difference and were just a point away from winning the second ever league title.

A Statue of Ibrahimovic was unveiled outside Malmo's home ground in October, but since the investment in Hammarby Vandals have targeted the statue to show their anger.

Vandals have also attempted to completely destroy the Statue but they have failed to do that resorting to defacing it with toilet seats, bombard it with fireworks and set it on fire.

Someone has cut off the statue's nose in another latest act of defilement.

Ibrahimovic's house in Stockholm was also vandalized and someone painted the word 'Judas' on his front door.

Ibrahimovic is currently a free agent after leaving LA Galaxy, he has been been linked with various clubs.