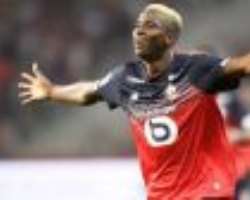 according to a report in Jeunes Footeux.
Osimhen has scored 11 goals in 20 appearances for Lille in all competition this season.

Mourinho is also interested in Osimhen’s Lille teammate Boubakary Soumare who plays as a defensive midfielder.

The young midfielder has earned rave reviews for his energetic performances in Ligue 1 this season.

Lille are expected to fight against the release of their two key players.

Osimhen scored a memorable goal for Lille against Chelsea in the Champions league and also scored a brace for Nigeria in the last international break against Lesotho.