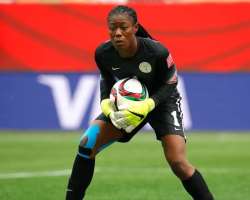 Dede joins Thomas Dennerby's backroom staff after they both worked together in charge of the Super Falcons before Dennerby left acrimoniously.

Dennerby and Dede will be in charge of the team as they host the world in the 2020 FIFA U-17 women's world cup on home soil.

Dede made 99 appearances for Nigeria and represented Nigeria in various International competitions before retiring in 2014.