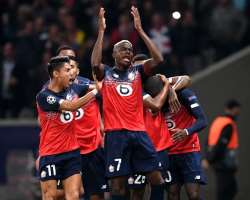 Super Eagles rave of the moment Victor Osimhen has been nominated for the 2019 CAF player of the year award.

Osimhen has enjoyed a breakthrough 2019 with top notch performances for club and country.

The 20-year-old striker joined Lille from Chaleroi in the summer he has scored seven goals in nine league appearances for the Ligue 1 side including a memorable goal against Chelsea at Stamford Bridge in the Uefa Champions League.

He played an integral role in Nigeria 4-2 win against Lesotho in the 2021 Afcon qualifier by scoring two goals and assisting the other two.

Super Falcons trio of Asisat Oshoala, Uchenna Kanu and Chiamaka Nnadozie were also shortlisted for the women player of the year category.

Asisat Oshoala has been impressive since joining Barcelona Femenin in January scoring 14 goals in 15 matches in the league.

Rivers Angel Goalkeeper, Chiamaka Nnadozie became the youngest goalkeeper to keep a clean sheet in the 2019 FIFA Women's World Cup, she impressed with series of world class saves in the competition.