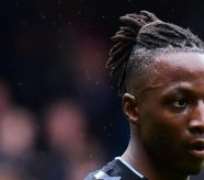 Joe Aribo has joined the likes of Teslim Balogun, Brian Idowu, Julius Aghahowa, Finidi George, Victor Agali and Obafemi Martins as Nigerians to have scored on their international debut.

The Rangers midfielder joined the revered ranks after getting the Super Eagles' first goal in Tuesday's friendly with Ukraine.

It took the 23-year-old less than three minutes into his maiden appearance for Gernot Rohr's men to find the net thanks to Alex Iwobi's assist.

Balogun was the first Nigerian to achieve this feat having scored in the country's 2-0 victory over Sierra Leone in 1949, while Idowu achieved the feat against Argentina in 2017.

Since their 4-1 defeat to Slovakia in a Uefa Nations League game in November 2018, Andriy Shevchenko's men have gone six games without defeat.

Before this game, they had recorded a 3-0 victory over Lithuania in a Uefa European Championship qualifying clash on Saturday.