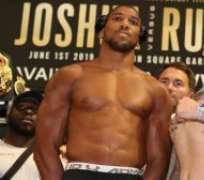 Andy Ruiz Jnr has dispelled concerns he has taken his eye off the ball ahead of his money-spinning rematch with Anthony Joshua by insisting he has 'the hunger' to defend his titles.

The Mexican achieved his life-long ambition of becoming the first-ever heavyweight champion from his country when he stunned Joshua by stopping him in seven rounds back in June.

Ruiz, who came face to face with Joshua for the first time on Wednesday since that historic night in New York, renews his rivalry with the Brit on December 7 in Diriyah.

The unified champion has been accused of living the high life by some corners of the boxing world, having been seen partying and splashing out on a mansion and a Rolls Royce in the months following his famous victory, but Ruiz has insisted he still has the drive to beat Joshua again.

'I don't want to be a 15-minute champion,' he said at Wednesday's first press conference. 'On June 1 I made my dreams come true. There was a lot of sacrifice and blood, sweat and tears. I feel like I'm here for a purpose.

'I know on December 7 Joshua is going to be coming hard, he's going to be strong, he's hungry but I am as well. I know a lot of people are saying I'm not training but I'm working hard.'

The 29-year-old is expecting a more focused and improved version of Joshua this time around but has vowed to pull off another major upset.

He added: 'Joshua's going to want his belts back and I know that so that is giving me the motivation to train even harder because I know he is pushing himself and it's making me more hungry.

'On December 7 I'm going to make history again and win in the same fashion and prove everybody wrong.'